Upgrading your iPhone to iOS 10? Here’s What to Expect 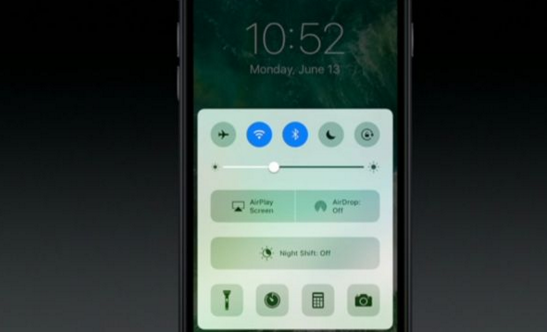 iPhone asking you to upgrade?

iOS 10 will be the biggest update to the Apple operating system so far. Team Noodle are feeling excited! We develop mobile apps for events that use iOS and we can see some great opportunities here. So what should you expect once you hit ‘update’?

Apple announced most of the changes to iOS 10 at a developers event in June, but they’re only just landing now. It feels like Apple have put a lot more effort into developing their operating system than their tech this year, so we’re expecting the result to be a more user friendly phone that allows the user to take more control.

The interface looks radically different to iOS 9, but don’t worry. It’s easy to use and designed to help you navigate all the new features with ease.

Warning: Since the launch on September 13, some users have been reporting problems after upgrade. Users describe phones being unable to reboot or restart and becoming ‘bricked’. Apple stated that these problems occurred within the first few hours of launch and also stated that the bugs have now been fixed, although the Guardian reported that some users were still experiencing problems.

i0S 10 was released on September 13. It’s available for both iPhone 5 upwards and iPad 3 up. You should be prompted to perform the update automatically. If you’re not seeing the prompt, simply go to Settings, then General and hit ‘update’.

There is a lot of interest in iOS 10, so it’s likely that Apple’s servers will be under pressure for the first few days after release. If you’re not able to update, try doing it early in the morning in the UK before the US wakes up.

Loads of little things that could add up to make a big difference to the user experience. It’s like an instant upgrade without the need to get a new phone (which is lucky, if you’re in any way attached to your headphones).

It’s cool to see the UI getting a massive overhaul, but I’m so disappointed that there isn’t greater access for third party developers to more of the software. I can’t believe the NFC capability is still a closed shop. I would love to be able to start offering contactless payment through our event apps.

This update is all about the UI. I like the changes. They make the whole thing much more user friendly. I move around my phone really quickly so I love all the new control panels and the amount of information they have managed to get on them. My favourite thing is the new design on the alarms and clocks. It looks really nice. The new timer and stopwatch look really simple and slick. I like the new typeface and typography throughout the phone. Nothing else stands out to me as a really strong new feature, it’s just the look and feel that have massively improved. I’m looking forward to getting the new OS on my Mac and seeing how that correlates.

The big headline! The lock screen is going to get a big overhaul and is about to become a lot more useful. There will be no more ‘slide to unlock’. Phew. Now, you can simply hit the home button to use fingerprint recognition to open your phone.

The lock screen will now also allow you to use 3D touch to respond to alerts instantly. Notifications are not broken up into bubbles and many of them will allow you to press on them and respond instantly without having to scroll through all your apps. You can accept or decline calendar invites and reply to messages without leaving the lock screen. Third party apps can also use the lock screen in this way. Uber have already created an update that will allow you to get a live update map showing you where your driver is.

With all those notifications, the lock screen could easily become cluttered and confusing, so Apple have added a simple ‘x’ to the top corner of the screen that allows you to dismiss all notifications in one fell swoop. Easy peasy.

Matt: I love the new lock screen. By swiping left I can now go straight from there to an app which makes life so much easier. I also think it’s really smart that you can swipe the other way to go directly to the camera.

Outside of the lock screen there are plenty of other great changes too. One of our personal favourites is the new Universal Clipboard which will improve continuity between devices. That will allow you to copy text or images on your iPhone and paste them on your Mac. Forget pasting things into emails and then sending it to yourself. This will make it much easier to transfer content between devices.

Clemi: Really great for our team when we’re testing client apps – when we find issues with a new app build we always need screenshots and this has always been a painful process as we have to email it to ourselves from phone, access screenshot on computer and then upload to bug tracking platform for developers. Anything that makes catching and reporting bugs easier!

Matt: It feels like they are developing the overall ecosystem incrementally so that all of the devices get better and link better. I like this feature but it’s not massive news.

To complement the new lock screen, the control centre (the one you swipe up from the bottom of the screen) will also get a revamp. It is now split into several panels that are much more de-cluttered than before. AirPlay and AirDrop buttons are getting bigger and to get to the music controls you will now need to swipe right to get to new control panel that is dedicated entirely to music.

Another cool new feature is referred to as ‘raise to wake’ technology. This means that the lock screen will display automatically when the phone feels itself being lifted, so you can see your notifications and updates without having to press a button. This also helps to get around the age old problem of blowing straight past notifications with the fingerprint ID. We just hope that ‘raise to wake’ is well implemented and only activates at appropriate times. If not, the battery life could be seriously compromised.

Clemi: I like this as it means my phone is always ready – even a single click to wake up the device can be cumbersome and time consuming when you use your phone as much as I do! It’s annoying to constantly have to unlock my phone.

Matt: This is a great feature. It removes the barrier to getting into the phone in the first place. Love it. 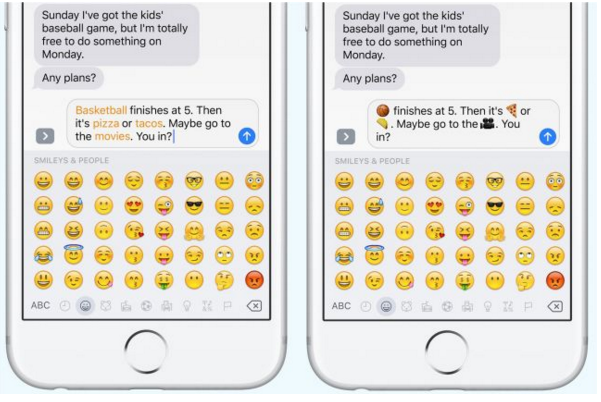 Messages app is also getting a big overhaul and is expected to become more user friendly. One thing we know for sure is that there will be bigger emojis (three times as big actually) and some kind of animations that can be embedded into messages. Take text to the next level with moving images and sounds. Not only that, but messages will also identify words that could easily be replaced with emoticons and allow you to switch with one tap.

Clemi: We love emojis at Noodle Live but when can we start sending gifs in messages? All Noodlers love gifs so this would be the next step for us – it’s what we share most within the team to keep us smiling so be great to see Apple embracing this in the same way Facebook has with GIF news feed support and option for GIF profile pictures.

Apple Maps will also get a revamp and will now be able to offer restaurant recommendations, traffic information and a vehicle tracker to remind you where you parked your car. Team Noodle are still pretty skeptical about Apple Maps, so we’ll have to see this to believe in it.

Clemi: Apple needs to give up on maps – Google Maps will always win regardless of how many extra features they put in – ultimately their maps are outdated, inaccurate and not useful.

Kitty (Noodle’s Tech Writer): Apple Maps will now recommend restaurants and cafes in your area and show traffic updates. That’s not why I use maps though. I usually know where I want to go and I just need help getting there. I’ve always stuck with Google Maps as they’re so much more detailed. Google have been using maps for so long that Apple will always be playing catch up.

Apple Music has had a big remake and will now feature built-in lyrics and a much more user friendly design. Apple are probably keen to contend with the growing range of third party music apps that are taking a lot of their business. Whether they can encourage users to make the shift or not still remains to be seen.

Following in the footsteps of Google Photos, iOS 10 will also be a lot smareter with your photos. It can make albums for you, place photos on an map of where you’ve been, and automatically cut together movies from your images and video.

Our old friend Siri will be getting a significant update too. The automated assistant will now be able to do better image searches, transcribe voicemails and even write text messages on your behalf. Apple are also planning to open up the Siri operating system to third party developers so it may not be long before you’re able to call an Uber using Siri or even create an Instagram update. We’re hoping that Siri can also get a bit more savvy at hearing different accents, including the Cornish tones of Noodle’s very own Head of Pencils Clemi Hardie, who has never been able to hold a conversation beyond ‘hello’.

Clemi: Siri may be about to get a lot more powerful, but will it be able to understand me finally? I know lots of our team use Siri regularly to set reminders during their working day but I still struggle to get Siri to understand anything I say*.

Kitty: I’m just not buying in to Siri until it becomes significantly more efficient and gets my requests right a lot more frequently. Apple want to lead the field in AI but they’re not moving quick enough. More often than not it takes longer to get things done using Siri than if I just do it myself.

*Note from Team Noodle: Siri can’t really be held accountable for this. Many people have this problem

To complement Apple’s new focus on water resistance, iOS 10 will be able to warn users when possible water damage is occurring. It will also provide instructions on what to do to avoid further damage.

So What’s the Noodle Conclusion?

We love that Apple are going for big changes for iOS 10. It’s about time that some of the kinks in the operating system were worked out.

We’ll definitely be looking in to ways to get alerts and updates onto the new lock screen, and also at ways that we could use Siri as tool for our mobile apps for events. It’s great to see developers getting the opportunity to use more aspects of the system that sit outside of the apps themselves. That being said, we’re pretty gutted that the same is still not true for NFC capability. We would love to access the cashless payment systems so that people could start using apps to make payments when out and about at events. That feels like a real opportunity missed!

More from our blog: What will the latest Apple upgrades mean for #EventProfs?

PrevPreviousThe Apple Event: What Does it Mean for #EventProfs?
NextOctober Events for Event ProfessionalsNext
Find Us On Facebook
Find Us On Twitter