The Apple Event: What Does it Mean for #EventProfs? 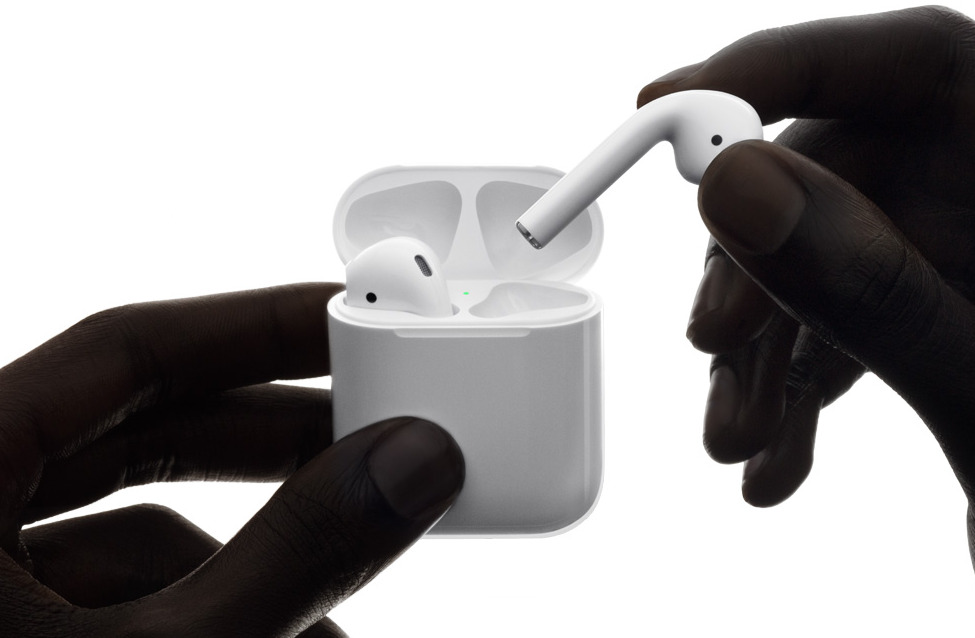 Apple have been at it again. Their latest attempt to redefine the world of portable tech comes in the form of the iPhone 7 and it’s new friend, the AirPod.

Apple had a range of announcements to make about all of their new tech, but for Team Noodle, the announcements about iOS 10 were what got us talking. In fact, we’re still thinking it over and looking at new opportunities to improve our mobile event apps. For now, we’ve decided to give you a quick overview of all of the hardware updates, and we’ve taken a more in-depth look at iOS 10 here. 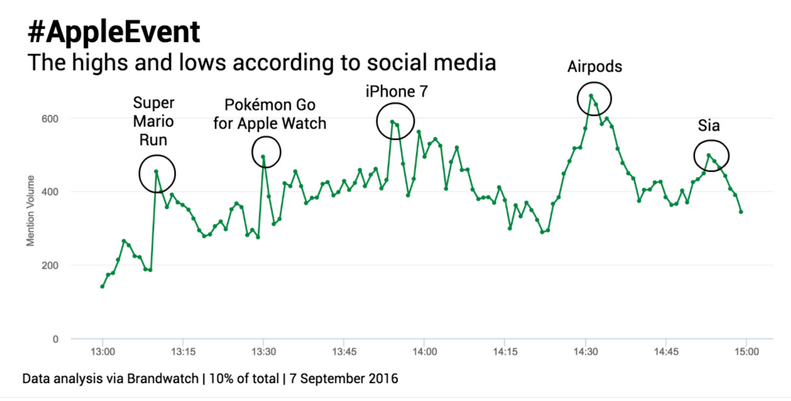 In look and feel, the iPhone 7 will be almost identical to the two previous generations (sorry, did we yawn?). The only really noticeable changes are the removal of the headphone jack and of the visible antenna lines that used to be found on the back. Internally, there were a few slightly more exciting changes:

What does it mean for #EventProfs? Let’s face it, none of the software changes will have a huge impact on the events industry. The iPhone 7 has a focus on better camera use, which is great for encouraging social media engagement at your events. Also, better battery life will make life easier on charging points and dying phone batteries, although only slightly.

When can we get it? You can order from September 9th and shipping will begin on September 16th. Rumours suggests that supply may be limited for the first few months, so get in fast.

The iPhone 7 Plus has many of the same features as the iPhone 7 including water resistance, no headphone socket and a better battery life. As with the IPhone 6 models, the Plus will be larger in size. It will also feature a better quality of camera with not one but two 12MP lenses including a wide angle lens and a telephoto lens. It will also be able to zoom to 10X with optical and soft zoom.

Most of the changes that were announced had been foreseen by tech critics or leaked in the last few months by savvy tech bloggers. The result? You could hear the collective yawn reverberate across Silicone Valley.

Those changes that were announced seemed to be welcome, but the general feeling was that they weren’t quite enough to woo over many Android users or to persuade iPhone owners to pay for an early upgrade, which Apple will need if they want to stay ahead of the market.

The Independent ran an article pointing out that Apple’s own warranty didn’t cover water damage and acknowledged that despite the claims to water resistance, water damage was still possible.

On social media there was a big focus on the loss of the headphone jack as well as the standard mockery of Apple’s slightly tiered hype tactics. 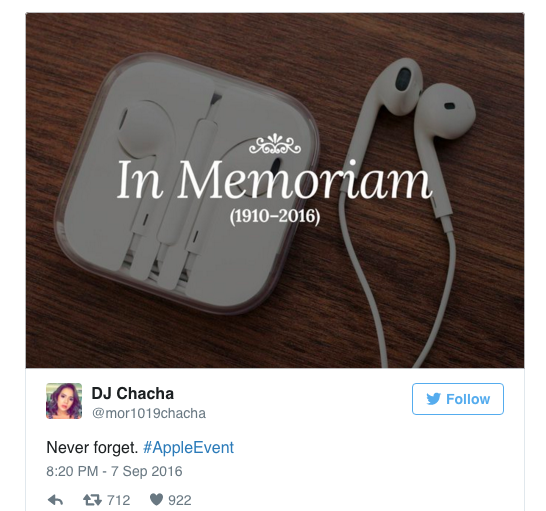 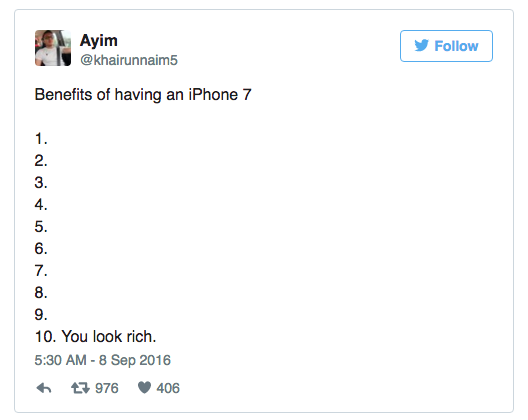 What is it? Basically, ordinary headphones that plug into the phone are out and it’s all about wireless earbuds now. AirPods are wireless headphones including a microphone for conversations on the go. They use infrared sensors that detect when they’re in your ear and only begin to broadcast audio when they’re inserted. A chip in the AirPods connects them to your Apple devices and motion sensors can also detect when you are walking or moving.

The AirPods need to be charged for use and will last for 5 hours when fully charged. They also come with a case that holds an extra 24 hours of charge.

Beats audio also announced the release of two wireless headphone sets to accompany the launch of the iPhone 7.

What does it mean for #EventProfs? You get to look more like a Bond Villain or secret spy when taking calls whilst out and about at events.

When can we get it? From late October onwards.

This was the part of the launch that got the most attention on social media and tech blogs. Most critics were asking whether consumers would take the plunge alongside Apple and throw out their tangled headphones, or whether the update would put people off upgrading. It’s a risky move for Apple. Our biggest question – will there be a new app called ‘Find my AirPods’? 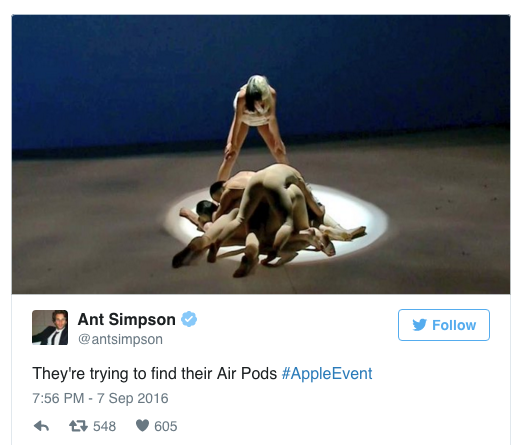 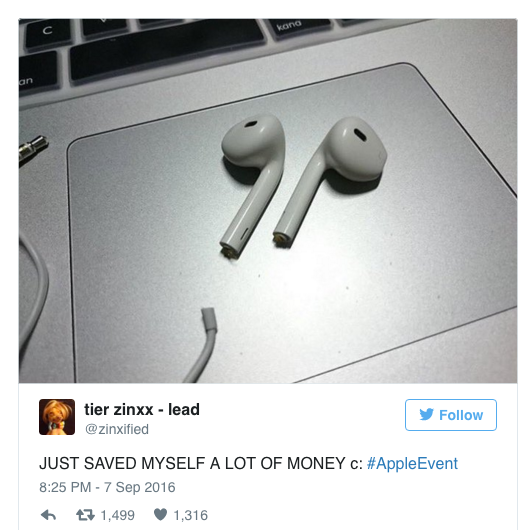 The new apple Watch Series 2 will be 50% faster with a dramatically brighter screen and built-in GPS, which is great for tracking workouts without the use of a companion phone. Apple were keen to stress that apps will run considerably faster on the Series 2.

In one surprise move, Nintendo joined Apple on stage to announce that Pokemon Go will soon be available on Apple Watch. This was the most surprising moment of an otherwise fairly predictable tech launch and as a result, stock in Nintendo soared 29%.

As was characteristic of this launch, the Series 2 watch will also be water resistant up to 50 metres. Apple made a point of stressing how helpful this would be for sports. The watch is entirely sealed, with the exception of the speaker, which is able to eject water at the end of a workout.

The latest version will come in silver, space grey, rose gold and gold. Aesthetically the watch will look almost identical to the previous version, but there will be new bands available including aluminum, stainless steel and white ceramic.

The new watch will feature a native Heath app called Breathe, which is specifically designed to help users tune in to their breathing and relax. This follows a rise in the popularity of mindfulness and meditation. Owners of existing Apple watches will be able to update their software to get the new app and other operating software upgrades from September 13.

Apple also announced a new Nike+ Apple Watch for runners that will have a special band, custom watch faces and a fuel tracker.

Ummm…There wasn’t really a reaction. A few people commented on the fact that Pokemon Go has already become tiered, and a few runners were keen to point out that the Nike+ Apple Watch is simply a version of the Garmin running watch. Other than that, it was a bit of a shoulder shrug and back to thinking about AirPods. 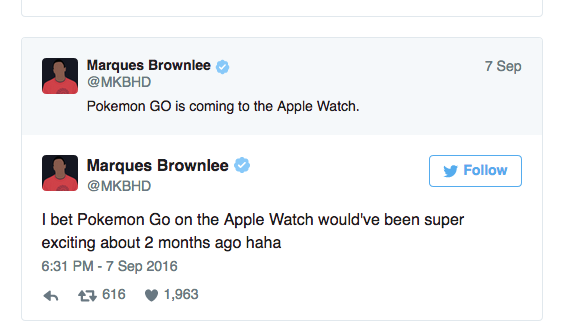 Remember the good old days when Apple launch events led to massive queues outside the Apple store and hundreds of excited tech nerds ready to sell their soul for the latest edition iPhone? Well, this wasn’t one of those days.

Overall, this launch wasn’t met with enthusiasm by most tech commentators. There have been rumours circulating that Apple are working on an all glass casing for the iPhone and that there will be an edge-to-edge display, but it seems that we may have to wait until 2017 to see these bigger and more exciting changes. Many journalists asked whether the 2016 updates would prove to be enough to excite consumers going forward and to help Apple to continue to dominate the market. In terms of development, we’ll continue to work on our mobile event apps for the iPhone, but we can’t see ourselves rushing to create Apple Watch versions any time soon.

PrevPreviousBest of the Internet: August’s Best Tech News for #EventProfs
NextUpgrading your iPhone to iOS 10? Here’s What to ExpectNext
Find Us On Facebook
Find Us On Twitter