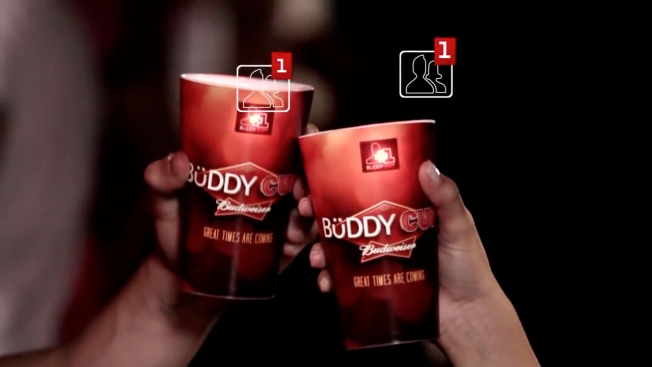 Remember when we wrote a post called ‘8 awesome uses of RFID and NFC’? Ah, those crazy days of 2015. Well, over the last few months, we’ve seen more great examples of the technology being used in new and interesting ways, so we thought we’d put together a quick update.

As you might expect, we’re pretty big fans of RFID and NFC here at Noodle Towers. We like to think it’s the technology which makes our event tech packages stand out from the crowd.

No idea what we’re talking about? The premise of RFID (Radio Frequency Identification) and NFC (Near Field Communication) is very simple – a tag comes into contact with a reader and an action is performed as a result of this. The reader communicates with the server by sending the tag ID and the reader ID so the server can perform the requested action.

OK, we’re glad that’s over – no more tech speak, we promise! The difference between RFID and NFC – one system uses your phone and the other uses a swipe card similar to an Oyster Card.

We love these technologies simply because of the number of different ways they can be used to perform any number of tasks – often in very creative ways. So we thought we’d pick our favourites to share with you, so we can all geek out together in one lovely big RFID and NFC appreciation fest.

Budweiser implanted RFID chips into specially designed beer cups which helped users to make social connections more easily. All they had to do was drink out of the ‘Buddy Cups’ and then clink their glasses together to automatically become Facebook friends. It’s a really sweet idea and the tech worked brilliantly. We love seeing people get really creative with RFID. The campaign was launched in Brazil by Agencia Africa and was available in bars across the country.

We don’t lie to sound overly dramatic, but this is the video that launched Noodle Live. No really! This video got Clemi thinking about the ways RFID could be used at events. It was one of the first times the tech had been used as part of a brand experience and it paved the way for lots of other brands to follow in their footsteps.

Every attendee was given an RFID wristband that linked to their Facebook. They could use it to check in at the venue, ‘like’ parts of the event and tag themselves in photos.

Another great example of RFID wristbands being used in a live environment – this time in a hotel to share your holiday experience with your Facebook friends. Now it’s even easier to make everyone jealous of your sun soaked holiday.

These kiosks have been set up permanently around this Ibiza hotel and each guest is provided with a wristband that is compatible with them. The same hotel chain also use fingerprint scanners to handle payments. Pretty tech savvy!

Renault took the jump at AutoRAI and placed RFID kiosks in front of every one of their cars so visitors could share their favourite models on Facebook with the swipe of a card. The cards were issued and registered at the Renault stand, generating a huge number of updates over the course of the event.

A great way to create buzz, but this is another very Facebook centric use of RFID. That could present problems if you’re looking to reach an audience which isn’t native to Facebook or if your updates are filtered out of the news feed because of EdgeRank (that’s the algorithm used by Facebook to construct your news feed – yes, Team Noodle are massive geeks).

This amazing use of RFID didn’t involve any social media integration. In the lead up to the New York Marathon, friends and family could record messages of support for different runners. On the day, every runner was provided with an RFID tag to attach to their shoes. When they passed certain points on the course, the message was triggered and played on large screens to encourage them.

The campaign was a huge success with messages from 17 countries and for 7,000 different runners. We might have gone soft, but it’s a bit of tearjerker too. Someone pass us the tissues…

Sorry, we’ve calmed down a bit now. So, onto our favourite uses of NFC – the process is pretty much the same as with RFID except your phone becomes the reader and the tags can be embedded in numerous every day objects.

We’re especially excited by the possibilities of NFC at Noodle Live, particularly if it ever ends up being opened up to third party developers on your iPhone. NFC is far more than mobile payments and smart posters, but it is the tech that powers Apple Pay, and these cool projects too: 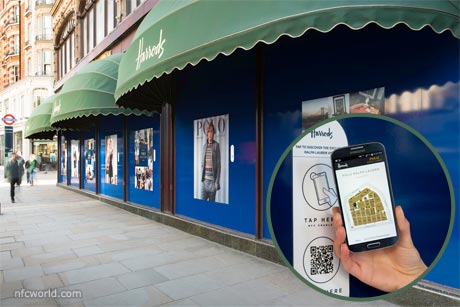 Commerce tech specialists Proxima helped Ralph Lauren to install these interactive window displays at London’s most up-market department store, Harrods. Shoppers could use their smartphone to activate an interactive map which led them directly to the Fashion Lab where they could buy all of the items they saw on display. If the store was closed then users could still access information about the collection from the Harrods website. Genius!

We love, love, love TecTiles! The Samsung Galaxy SIII was one of the first phones on the market with NFC functionality to break into the mainstream. The clever beans at Samsung introduced TecTiles as a way to increase the usefulness of this technology for the everyday consumer. These handy little NFC tags can be programmed using a simple app to perform any number of actions such as sharing contact details, checking in on Facebook, opening a specific app or sending a pre defined text. The possibilities are endless…

We have been known to enjoy the *odd* glass of wine here at Noodle Towers but it’s safe to say we’re not exactly grape connoisseurs. This often leads to a boggling experience when faced with the supermarket wine shelf but thanks to a nifty little app called Wine Tap, those days could soon be over. Simply tap your phone against the Wine Tap NFC tags to find out more information about the wine in question along with ratings, reviews and recipe suggestions.

We all know the scenario – go to café, need wifi, ask for wi-fi code, scribble down unfeasibly long code using an eyeliner pencil then smudge it on the way back to your table and be too embarrassed to ask again. Just us? Oh, ok then.

Ever thought there must be a simpler way? Well there is, thanks to Blue Butterfly and their genius service ‘TapToWiFi’. Now you can grab your coffee, tap your phone onto the smart poster and instantly be connected to the wi-fi network. Phew!

Another great idea to cut the queues using NFC – introducing Brand Table. You choose the restaurant by tapping your phone on the right logo, place your order, pay using a saved card then pick up your order when you receive the notification. Nifty, huh? We’re not sure this ever got past the prototyping stage but it’s a great concept.

So there you have it, our favourite uses of RFID and NFC – many of which have inspired us in the creation of Noodle Live. We’d love to hear which case studies have caught your eye. Why not leave a comment below so we can include it in our next round up?

If you’re thinking of taking the jump into the magical world of RFID and NFC for your event, then feel free to get in touch – we’re ready and waiting to make your next event even more awesome.

PrevPreviousNovember Events for Event Professionals
NextTech Round-Up: October 2016Next
Find Us On Facebook
Find Us On Twitter