App of the Month – Spritz

“I’d love to read more, I just don’t have the time” – Sound familiar? Imagine being able to read a full novel in only 90 minutes. Would you finish more books then? Of course you would! Well it might not be as ridiculous as it sounds. Introducing Spritz…

Spritz? What is it?

Spritz is trying to reinvent how we read, in order to make it more efficient. According to Spritz, “The time consuming part of reading lies mainly in the actual eye movements from word to word and sentence to sentence.” So by eliminating this movement, displaying each word in the same place at the optimal reading position your Words Per Minute can be dramatically increased.
Have a try:

Well if you’ve always wanted to read War and Peace, but you’re not really up for devoting your entire fortnight summer holiday Tolstoy’s lengthy tome, then it should come in handy!
Spritz says its text streaming technology is rooted in science and “uniquely designed” for small screens, removing the “inconvenience of scrolling, swiping, squinting and pinching” to read on devices inside a special display called a “redicle.” Plus, Spritz is simple to use, the company says, and can be learned in less than five minutes.
Put simply, it can help you read a LOT faster. If you were read a Harry Potter novel at 1000 words per minute you could finish it in around 1 hour. Magic.
So tell me more…

In every word you read, there is an “Optimal Recognition Point” or ORP. This is also called a “fixation point.” The “fixation point” in every word is generally immediately to the left of the middle of a word, explains Kevin Larson, of Microsoft’s Advanced Reading Technologies team. As you read, your eyes hop from fixation point to fixation point, often skipping significantly shorter words.
“After your eyes find the ORP, your brain starts to process the meaning of the word that you’re viewing,” Spritz explains on its website. Spritz indicates the ORP by making it red, and positions each word so that the ORP is at the same point, so your eyes don’t have to move. That’s what makes it different from RSVP speed reading, which just shows you words in rapid succession with no regard to the ORP.
If that all sounds pretty complicated (it is, don’t worry), here’s a graphic that shows how Spritz keeps your eyes still while reading: 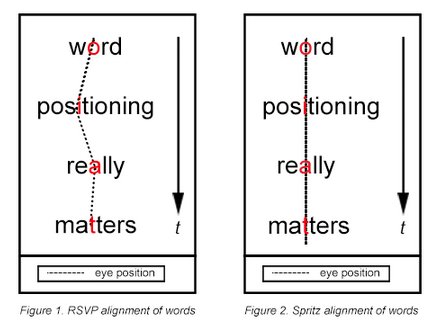 The Spritz app is launching exclusively on the forthcoming Samsung Galaxy S5 smartphone and Gear 2 smartwatch for the time being. But, if you’re interested in giving it a try right away, we thoroughly recommend heading over to Spritz’s website to test your skills.
The company said it is working with other mobile device makers, wearable manufacturers, and e-book firms to make the technology more widely available in the future. At this point, the technology supports English, Spanish, French, German, Russian, and Korean, though Spritz said support for more languages is on the way.
Give it a go, it really is amazing! Though we’re still a little unconvinced at what your retention is like when reading using Spritz. What do you think? Let us know in the comments below.

[Update: 3 Apr 2014]
Spritz began shipping its free software development kit (SDK) worldwide to let developers work with Spritz’s code and incorporate it into apps and websites. The more than 25,000 developers who have signed up for Spritz’s SDK will start to receive their kits soon. SDK launch will apparently be in a staged rollout, with website SDKs coming first, followed by SDKs for Android and iOS. Look out!

PrevPreviousCake of the Month: Great White Shark Attack Cake [video]
Next7 Quick Ways To Digitally Spring Clean Your LifeNext
Find Us On Facebook
Find Us On Twitter