Best of the Tech Headlines April

The tech web can be a crazy kind of place. One minute you’re reading a story about Lyft’s latest valuation and the next, you’re watching a video of a robot dog army dragging a truck along a road. And that’s all before 9am. Thanks ‘read next’ algorithm.

So, want to know the biggest tech headlines from the last few weeks, but don’t want to fall down the rabbit hole? We’ve taken a break from creating great RFID name badges for events and spent some time compiling our favourite tech headlines from the last 30 days, so you can get your fix of cool tech and crazy new devices, without falling prey to click bait. You’re welcome. Here’s what had us hitting share this month:

April was the month that a cardiologist managed to assist with heart surgery on a patient who was 400km away. The operation, performed in China, lasted 4 hours and used 5G technology and 4K ultra-high definition live video. Cardiologist Huiming Guo was able to observe and issue instructions. The video link was said to be 10 times faster than a 4G stream, allowing for absolute precision. A spokesperson for the hospital said “Advanced internet technology can save our doctors a lot of tine because they don’t have to travel as much. They can use that time to save more lives.”

An Army Of Robot Dogs Moved a Truck

Boston Dynamics’ robot dogs have been around for a while, but in the companies latest stunt to demonstrate the strength and precision of the robots, they filmed a pack of 10 dogs working together to pull a large truck. The 30kg dogs seemed to make light work of the heavy load.

Hong Kong artist Victor Wong has created an artificial intelligence powered robot that can create its own works of art. Wong has taught the robot various artistic techniques, but has also included an algorithm for randomness, so that the final paintings are entirely unpredictable. It takes the robot around 50 hours to create each work of art and they have gone on sale for an estimated £10,000 each. 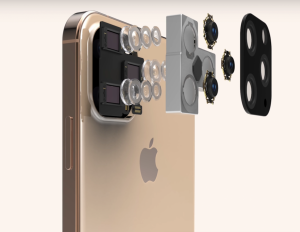 It’s no secret that Apple desperately need a big new tech release in 2019. Fans have been waiting for some ground-shaking new products, and their patience seems to be wearing thin. Luckily, there are several rumours circulating that could start to answer the call for some much-needed innovation from the tech leaders. Slashleaks suggested that Apple are set to launch two entirely new iPhones rather than upgrades of the existing models. They claimed that the new handsets could have 6.1 and 6.5 inch OLED screens as well as three cameras. The source also suggested that the phones will be slightly thicker with a USB-C connector.

Sound Amplifier allows you to adjust and filter environmental noise to allow you to reduce unwanted or distracting noise and focus in on quieter sounds, such as conversations. It’s a really exciting tool for events as it could help guests focus in on sound from speakers or exhibitors. We’re really excited by this use of tech, although we’ve been informed that there are still a few kinks to be ironed out.

A Franprix supermarket is testing assistant robots which can carry customers’ food purchases around the store and even carry it home for them. At the moment there are 3 robots being used in the trial and they can carry up to 40 litres. The robots pair with a customer using visual recognition and can then be programmed to ‘follow me’. Sadly, permission has not yet been granted for the robots to travel solo yet, so during the trial they will be accompanied by an operator.

There Were Glitches on Samsung’s Foldable Handset 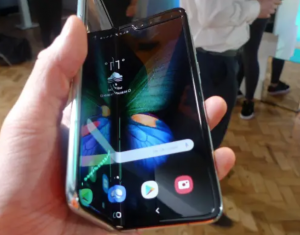 Yikes. Samsung’s much-anticipated folding foldable handset, Galaxy Fold, had barely left the factory for sampling when it was reported that several of the screens had cracked. The handset was circulated for early reviews, but several reviewers reported cracks appearing within days. The issue seems to have delayed the release of the product to the public and Samsung have now taking time to “fully evaluate the feedback and run further internal tests.”

As part of Assasin’s Creed, players are able to walk around in a perfectly reconstructed version of the Notre-Dame Cathedral. Following the tragic fire at the historic site, the makers have offered free access, so that people can still experience the magnificent architecture in 3D. The video game version took over 5,000 hours to create and included 140 reconstituted stained glass windows. Technology was also used to help ease the flames and finally stop the fire in the 850 year old building as reports have emerged that the fire-fighters used drones and a large fire fighting robot to help identify hotspots and deliver aerial data about the progress of the fire.

3D printing is finally starting to become less of a gadget and more of a real-world tool. Scientists in Tel Aviv printed the first ever 3D-printed heart, complete with ventricles, blood vessels and chambers. The hope is that 3D printed organs will become quicker and easier to produce, allowing for a more steady supply for transplantation and easing waiting lists around the world. It could be life-saving use of the developing technology.

The government have put an end to self-regulation amongst tech companies with a legal “duty of care” now placed on social media companies and content providers to ensure that they tackle harmful content including cyber bullying and extremist materials. Companies breaching the new regulations could be fined or banned from the UK.

iOS13 Will Have a Dark Mode

iOS13 is expected to land later this year and is set to include a system-wide dark mode which will allow you to use a darker theme throughout your phone in a similar way to MacOS.

Seen a great tech headline you think we should feature? Let us know @NoodleLive. When we’re not creating RFID name badges for events, we’re always on the lookout for weird and interesting developments in the world of tech.