What Does Apple Pay Mean For Event Profs?

Apple Pay has launched in the UK, allowing customers to pay for products using contactless payment technology on their iPhone, iPad or Apple Watch.

It’s still unclear how successful the launch will be in the UK. The service launched in the US last October to mixed reviews and a recent report suggested that 80% of people who have access to the technology have never used it. Despite this, Apple still claim the new tech will change the way we handle money. So what does it all mean for the events industry?

How does it work?

Apple Pay is a mobile payment system that allows you to use your Apple product to make contactless payments online and in stores.

Contactless payments have been around for a while. Many people in the UK have access to a contactless credit card and RFID has allowed contactless data sharing and payment for several years. Apple’s new service hopes to make contactless payments super slick, safe and user friendly to enable them to dominate the fledgling market just as they did with the MP3 player market when they released the iPod. 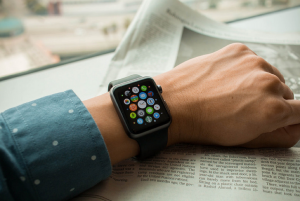 The Apple Watch is particularly well set up to use with Apple Pay. Since its launch, Apple Watch has been expanding its market rapidly. It’s expected that more than 15 million units will ship worldwide in 2015 and that the tech will make up more than 50% of smartwatches sold.

Apple claim that you can already use Apple Pay in thousands of stores around the country, and that more and more stores every day are updating to accept the technology. It sounds great, but a recent report from the US claimed that two-thirds of customers had reported problems at checkout. There are other drawbacks too. Apple Pay have been criticised for launching in the UK without the support of some of the countries largest banks, including Barclays. That means hundreds of thousands of users around the country are finding that their credit card is not compatible with the technology. Apple Pay is also not available on Android devices. You must own an Apple product to have access.

Apple Pay vs RFID for events

Several studies have shown that there is a strong consumer appetite for cashless payment. A report from Capgemini and RBS found that mobile payments are set to grow by 60% this year. For event organisers, the real question will be whether Apple Pay can rival RFID to handle cashless payments while out and about.

Accepting cash has always been a problem for event organisers. Customers run out of cash quickly which can lead to reduced consumer spending. That’s why RFID contactless payment options have become a popular alternative. At Noodle, we help our clients to create contactless payment options which create dashboards and data, allowing them to keep track of how and where funds are being spent in real time, so quick decisions about re-stocking or redirecting customers are easy. On average, consumers tend to spend around 20% more when they can pay with contactless technology.

By contrast, mobile payments are controlled by the consumer rather than by the event organizer, so gathering data about consumer habits is much harder. One option would be to provide event attendees with devices that have been pre-charged with Apple Pay credit, although the costs would be considerable.

Festivals and events could also struggle to capitalise on mobile payments due to problems with signal strength, lack of charging points and security issues around carrying tech products everywhere you go.

Apple argue that their system has the potential to be more secure than traditional credit cards which make your personal information visible every time you hand them over. By contrast, Apply Pay holds all of your information securely and never shares it with the merchant so you never need to reveal your name or card number. If your device is lost or stolen you can log in via iCloud to stop payments. Despite these measures, since the launch of Apple Pay in the US it has been dogged by accusations or fraud. In March 2015, The Guardian claimed the service is being used to make payments using stolen credit cards and identities.

How could Apple Pay benefit your event?

Events guide and ticket seller Skiddle have already announced that they will be allowing event organisers to take payment using Apple Pay via their RapidScan Mobile Box Office app. Ticketing is one area that the new technology could become useful in the future.

One benefit of Apple Pay is the ability to take peer-to-peer payments. Users can transfer money to each other in real time, allowing small business or stall-holders to take mobile payments quickly and easily.

At Noodle, we can also see some potential for pre-loaded RFID smartbadges and event mobile apps complete with an Apple Pay account that could be used to charge expenses in real time, avoiding the need to invoice post-event. Devices could be used to pay for car parking, TFL and Uber or loaded with enough funds to cover daily allowances.

Apple Pay is an interesting contribution to the growing market for contactless payments in the UK, but there are some wrinkles to be ironed out before event professionals begin investing in event integration. Most importantly, the success of the system will depend on UK banks and retailers willingness to buy-in to the product. The cost barrier could also become an issue, as could the number of customers who do not have access to Apple products.

We’ll be keeping an eye on developments around Apple Pay so keep your eyes peeled for the latest news and updates from us!

PrevPreviousWhat is RFID? And why should I use it for our event?
NextApp of the Month: SomebodyNext
Find Us On Facebook
Find Us On Twitter