Congratulations. What is it?

Yep, the tech jargon can make it all sound pretty confusing, but in essence, this is a huge announcement for #EventProfs because it means significant changes to technology systems for live events.

The app is available for both Android and iPhone users and uses the phone’s built-in NFC (near field communication) to turn your phone into a simple tap and interact device. It’s the same tech that powers Apple Pay. When you tap your phone on an Oyster reader, the NFC chip in your phone recognises the device, connects to your bank account and performs the required action (eg paying for your tube fair). iPhones have included NFC chips for a few years now, but it was only this year that Apple finally allowed app developers (like us) to access the tech. As soon as they did, the boffins in the Noodle Labs got to work, adding NFC functionality to our apps for events.

It might not seem like a big change, but NFC event apps could actually have a huge impact on the look and feel of events. Here are 6 ways the new tech will change the live event industry:

The big one! RFID systems out of your price range? NFC event apps will offer all of the same functionality as our RFID name badges, but at a much lower cost. Attendees can register, check in for sessions, swap contact details, collect content or even check their coats, all using their event app! Instead of installing physical hardware, such as tablets, around your event, NFC event apps will allow users to scan a simple poster or sticker using their own device. This means a huge reduction in setup costs [fist pump]. 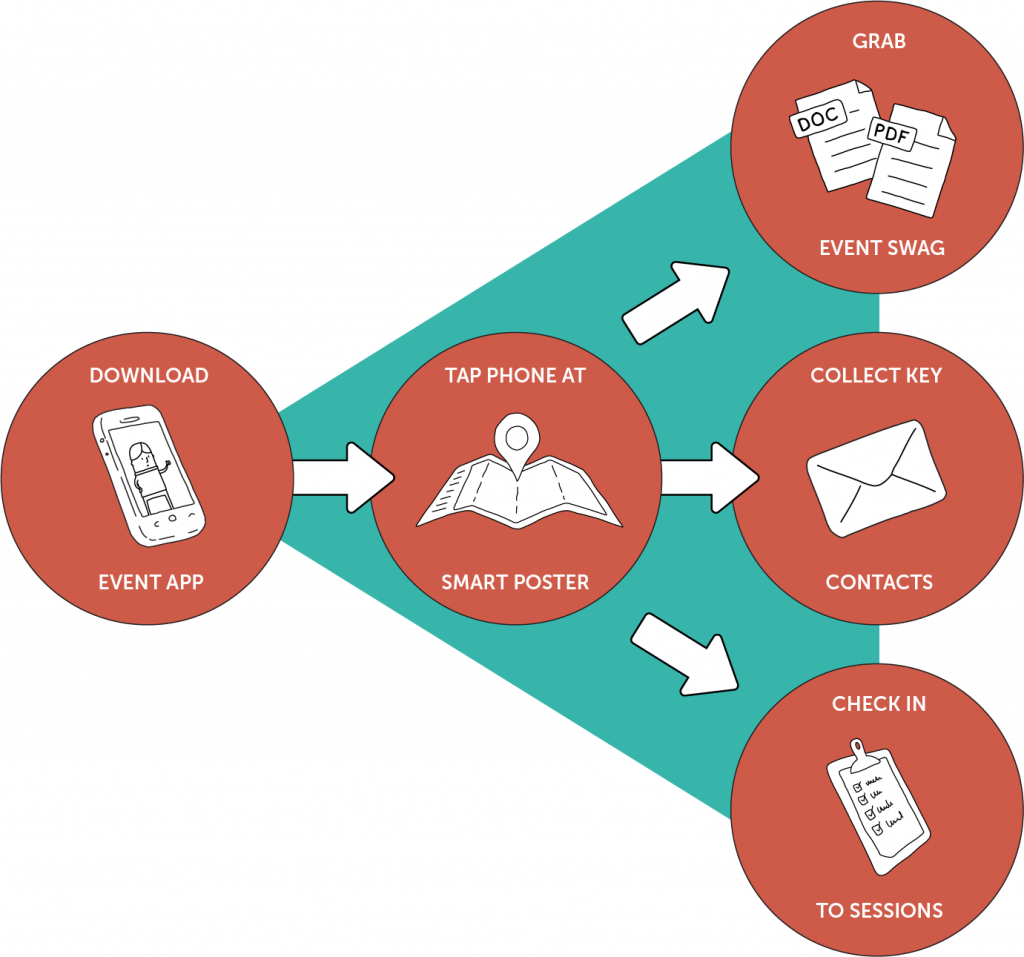 Using NFC-enabled event apps, the tablets that are used with RFID systems will be replaced with smart posters. To interact with a touch point at an event, users can simply tap their phone at a smart poster containing a small NFC sticker. In the past, #EventProfs installed screens around the event environment. Attendees could then stop at a screen and swipe their RFID name badge to interact. With an NFC event app, the process is reversed, so attendees simply tap their phone on a poster and then use the screen to view information and interact. #EventProfs can design and encode their own posters using an online portal.

BYOD stands for bring your own device, and it’s a huge tech trend at the moment. Instead of supplying attendees with tablets to interact with, #EventProfs can use their own personal device, such as a smartphone or tablet and interact via their event app. As more and more of us become permanently connected via our portable tech, more real-world environments are moving towards BYOD. Not only is it more cost-efficient, it’s also helpful for users as it means they don’t have to swap between a second screen and their own personal device.

Heard of the internet of things? Essentially, it’s the idea that more and more objects in our physical surroundings will begin to be connected to the internet, allowing us to interact with them and helping us to keep track of useful data about what’s happening in the physical world. In our homes, this could mean that your fridge could recognise that the bulb is about to die and order you a new one on Amazon before you even realise you need it. Clever stuff! NFC event apps are bringing iOT to live events by allowing attendees to interact with their physical environment and blurring the distinction between physical and digital spaces. That’s great news for data gathering and for collecting really useful stats about your event that could ultimately help you measure event ROI.

Thanks to NFC event apps, your name badges won’t need to contain an RFID chip. The chances are though, many events will choose to keep name badges of some form as it’s still useful to be able to see people’s names, but the cost of production could be significantly reduced. It’s also worth remembering that the switch to NFC event apps will need to be rolled out gradually as not all event attendees will have NFC enabled phones immediately. For the time being, Noodle Live will be offering a dual solution, with RFID name badges issued to all guests on arrival and an NFC enabled event app available too. Guests can choose the solution that works best for them.

NFC capability makes event apps a lot more useful, which means you’re likely to see a much higher uptake amongst your attendees. That could be helpful in all kinds of ways, from increasing post-event feedback via the app to increasing attendee networking and social media posts.

Interested in seeing a free demo of our new NFC event apps? No problem. We love showing off our tech products. Get in touch and we’ll get a date in the diary!

PrevPreviousThe Most Popular Event Industry Headlines: October 2017
Next5 Things We Learned at Event Tech LiveNext
Find Us On Facebook
Find Us On Twitter