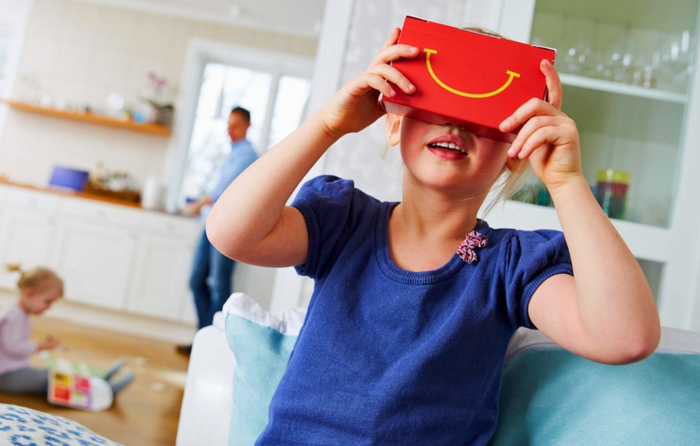 Last month, we featured virtual reality as one of our top event technology trends for 2016 (yeah, we know – no secrets there, but we couldn’t ignore it). This month, we’ve been looking at the ways the tech is being used by #EventProfs and brands around the world to find a little inspiration.

There’s no denying the appetite for VR amongst consumers. Last month, Occulus Rift headsets went on sale online with retailer BestBuy and were sold out within minutes. As the technology grows in reach, so does the appetite for new and interesting ways to use it. The pressure is on event organisers and experiential marketers to think creatively and find new frontiers for the tech. Inspired? You will be after looking at these awesome uses of event tech: 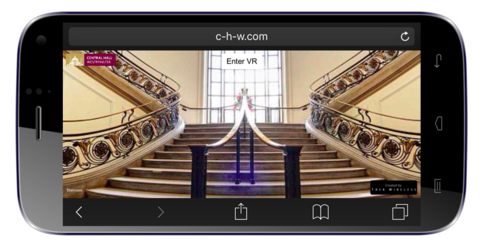 Earlier this year Central Hall Westminster launched a virtual reality experience that they hope will attract #EventProfs around the world to hire their venue space.

The experience uses VR as an event technology guide system and allows viewers to get a 360-degree tour of the venue. It also offers the option of viewing the space in use in a variety of difference event scenarios to help them see the potential. Say goodbye to boring photographs and digital tours, you can now expect to get closer than ever to being in the space itself and to visualising how your event will look – all without leaving your desk.

#EventProf Inspiration: #EventProfs could easily use a similar tactic to mock-up the look and feel of an event to show a client how the finished results will look. They say a picture tells a thousand words, so it might be time to put an end to lengthy pitch documents and consider creating VR experiences instead.

They say a picture tells a thousand words, so virtual reality must tell a million. That’s probably why the European Commission offered $200,000 towards research to create technology that uses VR headsets to transport members of a jury to the scene of a crime and allows attorneys to guide them through the scene and the evidence found. So far, the scheme is still an experiment, but there’s a lot of interest in the project that is thought to be a huge help to both prosecution and defence lawyers as it could help jurors to have a far deeper understanding of the crime.

Using a similar idea, last year journalist Nonny de la Pena recreated the exact scene of the shooting of Trayvon Martin to allow viewers to better understand the circumstances of the fatal shooting.

#EventProfs Inspitation: Want to tell your audience a great story? Don’t just rely on words, take them straight to the scene and let them experience it for themselves. Whether you’re telling the story of a product, destination or simply a party theme, VR offers a new method of communication with your audience.

Brain surgeons have been offered access to virtual reality technology that allows them to practice intricate techniques before big operations. The simulators allow doctors to use similar tools to the ones they will be using in real life surgery situations, so that they can feel completely prepped and ready when the big day comes.

#EventProfs Inspitation: Nervous about your big event and making sure everyone is co-ordinated? Why not mock up an event scenario and practice the logistics using virtual reality. Take a walk through the space, measure up event furniture and decorations and make sure that everyone is as you planned. Beats boring checklists any day!

Total Immersion in a Product: Boursin

Spreadable cheese makers Boursin have joined several other brands from the food industry to come up with inventive ways to engage their customers using VR. They put together an experiential roadshow which they called The Boursin Sensorium. It combines the visual immersion of virtual reality with aroma machines and binaural sound to allow consumers to explore the delicious flavours and the ingredients of the cheese whilst travelling on a rollercoaster style ride through a giant fridge. That’s more fun than Alice had in Wonderland.

#EventProfs Inspiration: Virtual reality doesn’t have to be used alone. These days, sensory technology offers loads of interesting ways to engage people’s imagination. Immersing someone in a strong visual world could just be the beginning of the story. Combine VR with smells, tastes, sounds and textures to take experiential events to another level. 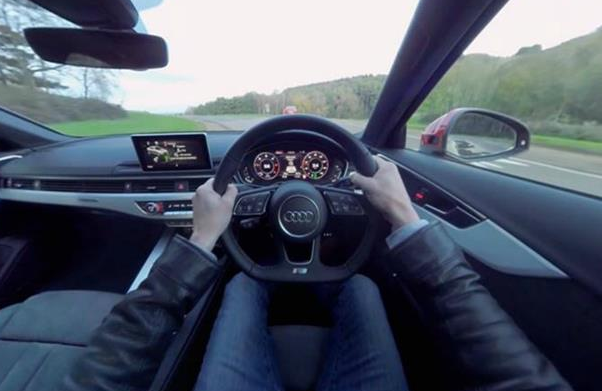 Several car brands have jumped onto the virtual reality bandwagon to create virtual test-drive experiences that anyone can try. Earlier this year Audi released a virtual reality test drive experience that allowed users to test drive the new A4 model in 360-degree video. Shot from the perspective of the driver (an industry first), the video is intended to convey the smooth driving sensation and exceptional views from behind the wheel.

Viewers can visit an Audi centre to experience the full effects of the headset experience, and they also posted it to their YouTube page, allowing viewers without a headset to watch the footage.

#EventProfs Inspiration: Audi used virtual reality as a marketing tool, cashing in on the excitement around the new technology. Offering viewers the chance to try out the headset at their local Audi centre is expected to attract new potential leads, whilst the YouTube version serves as a viral marketing video. Whilst virtual reality for events is still new and noteworthy, #EventProfs and marketers who offer the tech at their events are likely to draw eager tech enthusiasts who are keen to try out the new headsets. 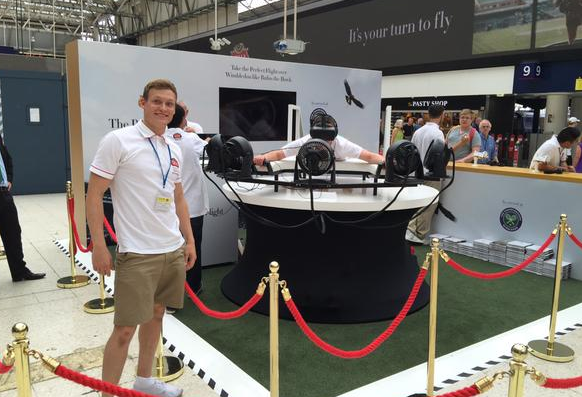 Beer brand Stella Artois sponsored the Wimbledon tennis tournament in 2015. As official sponsors of the event they created a virtual flight experience powered by Rufus The Hawk, the resident bird of prey kept by the tennis club to keep pigeons away during tournaments. Rufus lent visitors his graceful wings for the day and took them on a tour around the world on a behind the scenes tour of the tennis courts and various areas of the club. Taking the experience to the next level, visitors to the stand at the brand roadshow were asked to lie on their stomach on a specially created platform while fans blew wind at their face to simulate a flight experience. The video was captured using a drone and mimicking Rufus’ typical flight patterns.

#EventProfs Inspitation: Offer sponsors new opportunities to display their sponsorship and increase your potential revenue streams with branded virtual reality tours and videos that will have a wider reach beyond the event itself.

American clothing store JC Penny rely on the winter holiday season for a boost in sales before the end of the year. To attract more of their target audience, namely families, they created an in-store VR experience that transported viewers to the North Pole to meet Santa, pet reindeer and enjoy the snow. The experience put a modern day twist on the traditional Santa’s grotto and the company were rewarded with a boost in visitors and a shop full of excited children.

#EventProfs Inspitation: Consider your target audience and create experiences that will appeal to them in order to boost event attendance.

Think the iconic red box is pretty old hat? Think again. With the aim of making the happy meal box magical for a whole new generation McDonalds recently added some simple changes to the design which allowed customers to turn the box into a pair of VR goggles, simply by ripping along the perforated edges and folding where instructed. Using a smartphone, viewers were then able to stream specially created videos in a VR environment.

#EventProfs Inspitation: Don’t get caught up on the idea that virtual reality for events has to be high budget and high tech. Be playful and unexpected and consider using existing materials such as smartphones to bring the experience of VR to people’s everyday lives.

Netflix have been accused of putting an end to the traditional movie rental store with their on-demand streaming service. So when they announced that they were using VR to create an immersive rental store to showcase their programs and films, it seemed like we had come full circle. In reality, the showroom is just a different way of visualising the regular menu items, but it gives a nostalgic twist nod to the experience of our childhoods. The familiar categories are reimagined as different shelves and users can browse the isles from the comfort of their own home before sitting back to enjoy the movie of their choice.

#EventProfs Inspitation: VR is new tech, but there’s no reason you can’t use it to tap in to people’s nostalgia and familiar memories. The mix of old and new create a great experience.

Demand for footage for VR video and experiences is likely to grow exponentially over the next few months as the tech cements itself as one of the year’s biggest event technology trends. VideoBlocks have long offered users access to stock footage to use for cutaways and background shots, but they’ve been quick to spot the new trend too, recently adding royalty-free 2D, 3D and 360 degree video to their archives. You can currently purchase videos of a beach and pier or of commuters at New York’s Grand Central Station amongst others.

#EventProfs Inspiration: In today’s digital world, industries are changing rapidly. Some technology specialists predict that VR will be a game changer for a number of industries, so pay careful attention and look for ways to innovate and update old ways of working.

Interested in getting more event technology guides and following the top event technology trends? Our guide to virtual reality for events is just one blog in our series of event tech updates. Keep checking back for more!

PrevPreviousEvent Tech of the Month: Glisser
NextWhat To Call Your Event Wi-Fi? Funny Wi-Fi Names To Entertain GuestsNext
Find Us On Facebook
Find Us On Twitter