Well hello 2018 and goodbye 2017 – you’ve been a cracker. Over the last 12 months, Noodle Live has more than doubled in sized, held our first webinar, moved to new premises and released a brand new piece of event tech: the NFC event app. 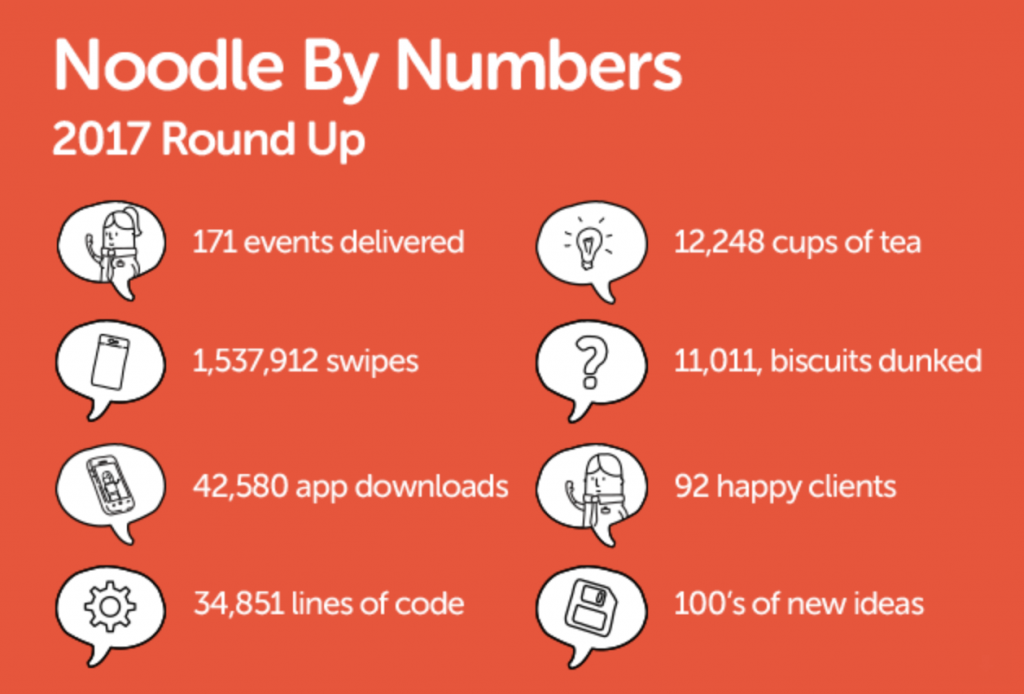 2017 was a rollercoaster in the world of event tech. Apple made game-changing announcements, robots were plotting to take over the world, GDPR was looming and Team Noodle triumphed at sack racing in the event tech games (no surprises there though)! Yep, 2017 has treated us well and we’re ready to take on 2018 like a boss.

But first…one of our favourite annual traditions! We’ve got some tech-inspired cracker jokes to help you LOL your way through the festive season (or groan and roll your eyes – either one!).

How many programmers does it take to change a light bulb on the Christmas tree?
None, that’s a hardware problem.

Why does the programmer think the Grinch’s attitude isn’t bad?
He says it’s in beta.

What did Spock find in the Enterprise’s toilet after Christmas lunch?
The Captain’s log.

What did Adam say the day before Christmas?
It’s Christmas Eve.

Did you hear about the Coder who missed Christmas because he got stuck in his shower for a week?
The instructions on his shampoo said: Lather, rinse, repeat.

What’s round and bad tempered?
A vicious circle

Why didn’t Santa give out vacuum cleaners for Christmas?
The would only gather dust.

What did Cinderella say when her photos didn’t arrive on time?
One day my prints will come.

Why did no-one bid for Rudolph and Blitzen on eBay?
Because they were two deer.

How did Mary and Joseph know that Jesus was 7lb 6oz when he was born?
They had a weigh in a manger.

What did the scientist get when he crossed a cow with an octopus?
A meeting with the ethics committee and swift removal from his post.

Want to hear a Christmas joke about potassium?
K.

Why was Pavlov’s hair so soft at the Christmas party?
Classical conditioning.

What did the photon say as he checked into his Christmas accommodation?
I don’t have any bags. I’m travelling light.

PrevPreviousNetworking Events for #EventProfs, January 2018
Next9 Most-Shared Event Industry Articles of 2017Next
Find Us On Facebook
Find Us On Twitter