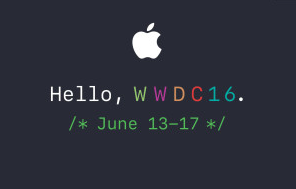 The 27th annual Apple WWDC Developer Conference will be held in San Francisco from June 13-17. The conference is a huge date for #EventProfs calendar when it comes to event technology news and is also a haven for anyone interested in developing Apple-compatible software, usually in the form of apps. In typical Apple style, this year’s conference dates were leaked through Siri who was the first to reveal the dates and location of the conference.

The tickets are pretty sought-after and are awarded through a lottery system, but developers around the world can follow most of the big events online. Live streaming will be available through Apple’s website or the WWDC conference app.

Thousands of app developers from around the world will be heading to the conference to learn more about updates and developments to Apple’s four main software platforms: iOS, OS X®, watchOS® and tvOS™. The conference is the best place to get in-depth information about the latest advancements in Apple tech. Team Noodle will be watching the event closely to make sure we capture any future event technology news or updates that could impact or improve our bespoke event apps.

What do developers get?

The conference also offers early access to the latest innovations and updates, talks from some of the biggest names in the industry and a great opportunity to connect with thousands of developers from around the world and have a bit of a party, ‘Silicone Valley style’. Coinciding with the Apple event there will also be loads of other tech events scattered throughout San Francisco during the week.

For app developers the event also offers incredible access to some of Apple’s best tech minds. Bring your code to the event and you can ask Apple’s engineers to help you add some of the latest features. More than 1,000 Apple engineers will be in attendance to give more than 100 demonstrations and labs, offering assistance at code-level and giving expert insight into optimal development techniques.

There are also opportunities for one to one help with user interface design, app distribution, marketing and analytics. It’s a bit like the super-geek version of the genius bar. And as with IRL genius bars, you’ll need to make an appointment for this much-loved service as soon as you can.

What do we know about Apple WWDC Developer Conference 2016 so far?

As with all Apple events, exact details of what will be announced are shrouded in secrecy, but there have been a few helpful hints. We know for example that for the first time ever the opening keynote speech has been moved to a larger venue – suggesting that Apple expect this event to be one of the biggest yet. In previous years the speech was held at Moscone West, with a capacity of 4,500. This year it will be held at the Bill Graham Civic Auditorium, roughly one mile away and with a capacity of closer to 7,000.

This year’s invitation has fueled that speculation. Written in Apple’s Swift language it gives a fond nod to some of the platform’s most successful apps including Instagram and Snapchat. But the 11th line of the invite, which reads ‘Hello big idea’, has got people talking. Could it be a hidden message to suggest big changes at this year’s event? Maybe. We’ll have to wait to find out.

That’s what we know, but as in other years, several rumours about possible announcements have already started circulating. One of the most common opinions is that Apple are likely to unveil brand new versions of iOS and possibly OS X. If the new platforms are not ready to be launched, at the very least we are likely to see demo versions with big reveals on the new features.

iOS 10 (the iPhone and iPad operating system) is expected to be major news for developers and could possibly require several tweaks and updates to existing software. It’s rumoured that Apple are aiming for a massive overhaul of their overcrowded App Store.

OS X (the operating system that powers Mac computers) is expected to get big updates this year and many are suggesting that it could also be in for some serious rebranding with a new name – MacOS to bring it line with the other platform names. The invitation to the event seemed to suggest an emphasis on development which has led some people to suggest that Mac Apps will be an important part of the conference. We could also be seeing a new Siri icon in the Mac dock. Rumours have been circulating for a while that Siri will be coming to the Mac, and if it’s going to happen, it’s likely to be at Apple WWDC Developer Conference 2016.

It’s currently unclear how many updates could be made to tvOS (Apple TV’s operating system). tvOS has only been around in its current iteration for around six months, so it’s unlikely that any major developments will be made to the platform. The fourth Apple platform, watchOS (Apple Watch operating system) could be due for a big change at the conference, but no big rumours have emerged yet.

It’s expected that the Apple Music app will get an update, giving it a more intuitive user interface that includes a ‘Browse’ tab to make it easier to search song lyrics. Apple Music was released at last year’s conference to a less than enthusiastic response, so this year could be a chance to put things right and start fresh. There are currently 13 million subscribers but Apple are still losing out to Spotify and have failed to gather user support.

Support for Apple Pay is expected to be added to web browsers, allowing users to make purchases using Safari. It’s also thought that a new person-to-person payment feature could be added.

Popular opinion states that the Photos app is due for an update, but it’s unclear what that could entail.

Although WWDC is a software conference, Apple have been known to make a few well timed hardware announcements too. Many people are speculating that we could see the launch of Apple Watch 2 in San Francisco. The second version is expected to be thinner, faster and with a longer battery life.

Apple are also expected to reveal 12-inch MacBooks and upgraded MacBook Pros at some point this year, so we may see this at WWDC. If not then we’re likely to have to wait until Autumn. The current MacBook Pro range have a design that has not been updated since 2012, so changes are due.

The keynote address happens on the first day of the conference and sets the tone for the rest of the week. Most major announcements will be made during the address including major announcements and a run through of new design features. Developers can then spend the rest of the week attending sessions that will shed light on how these new changes will work and what they will entail. The keynote is followed by the Apple Design awards, recognising some of the most remarkable talent in the industry from the last 12 months. You can watch the keynote address via Apple’s live streaming or via the conference app.

It’s not part of the main Apple conference, but if you’re keen to begin networking and meeting other developers then head to the Beard Bash 2016 following Monday’s keynote address. It’s held at local live music venue The Mezzanine from 8pm-11pm and the headliners are Airplane Mode.

Sessions will be held at Moscone West from Tuesday – Friday and most of them will be offered as a live video stream via the app or website. These sessions are perfect for anyone who wants in-depth technical knowledge about the next generations of software and the latest Apple technologies.

Labs are your chance to get up close to Apple’s in-house engineers. Labs are like workshops so you can get hands on help and advice and learn from other developers in the group too. All labs are held at Moscone West.

These sessions are like gold dust so make sure you book early. Consultations are your chance to work one-to-one with an Apple expert to iron out any problems with your code, user interface design, analytics, marketing or app distribution.

For some after-hours fun head back to The Mezzanine for a live audience episode of tech favourite The Talk Show on Tuesday from 6pm-9pm. Hosted by John Gruber from Daring Fireball, the show will include detailed discussion of the latest trends in event tech and what to expect at the conference. There will also be a live video stream available to those who can’t make it in person.

Rest for lunch? No way! The WWDC lunchtime talks offer some of the most inspiring moments of the week. Get inspired by leading industry experts as they deliver their insight and wisdom in a series of TED style talks.

Thursday is time to party at the Bill Graham Civic Auditorium where live music, food and drinks create time to mingle and get to know other developers and engineers. This is Apple’s official after hours event and a great place to meet future business partners and colleagues. The event has previously been held at Yerba Buena Gardens and has seen some huge headline performers. With Zane Lowe being revealed as Apple Music’s Beats 1 DJ he may well be involved in selecting this year’s lineup.

That’s it! We recommend that you download the conference app, whether you’re going to the event in person or watching remotely as it will contain loads of great information and easy access to session notes and live streams. Once that’s done, you’re ready to make the most of the Apple WWDC Developer Conference. Watch our Twitter stream @NoodleLive for regular updates.